Although This trip from Montreal to Quebec City was uneventful, it was my first time taking a train, so at the risk of sounding really boring, I was excited to travel up to Quebec city this way!

Also, given that the biggest winter party was about to start in this city all the hotels were booked but my friend, who lived out of town and was moving that weekend so unable to host me the whole time, helped me out. Given that I have served in the military before I was able get accommodations on the base in Old Quebec, but not just any base, The Citadelle de Quebec, home of 22e Regiment or ‘Van-Doos’ as they’re called, which is next door to the Plains of Abraham, the deciding battle ground for the fate of Canada in the Seven Year’s War. It was pretty cool staying at a piece of Canadian history.

Old Quebec and The Winter Carnival

Since all the classes were in the evening I had all day to rest up, work on my blog and wander around the check out the city. I took a bunch of pictures of Old Quebec and the events going on around the area. If you didn’t know, the Quebec Winter Carnival, or just ‘Carnaval’ to most Canadians, is a huge festival in the city with all sorts of activities like the toboggan slide by the Chateau Frontenac you can race down the hill on. there’s all sorts of maple toffee booths where you pour hot maple syrup in the snow and as it cools wrap it around on a stick. And what most people love the most, the ice sculptures and structures that get built around the city, in fact if you venture north of the city you’ll find the Ice Hotel. I took what pictures I could of the city and events, but I wasn’t around for the main events on the weekend, but I was there for Jiu-Jitsu and seeing friends, not being a tourist. 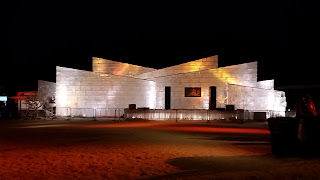 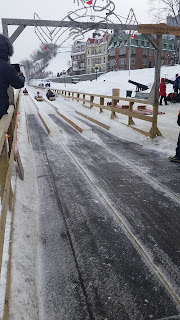 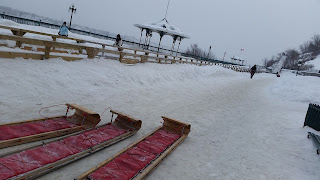 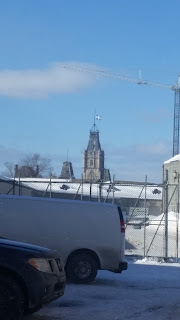 Last year I stayed in Quebec City for a month and Dojo Yoseikan Jiu-Jitsu Quebec was one of the clubs I trained at while there. I wasn’t familiar with Yoseikan Jiu-Jitsu, I never it had Aikido roots but that was about it. Has it happens it’s much ‘harder’ than Aikido and more similar to the traditional Jiu-Jitsu I practice. In any case, Sensei Dominic Toupin was more than happy to have me and the club was very welcoming, and so when I returned this time I had to drop by and visit my friends once more! Once I settled in at the Citadelle I checked the schedules and realized that I only had one class I could it make it out to see the Yoseikan guys and it was that night, so I got ready and took off and made an unannounced visit to the club. Luckily most the guys I remembered from the club made it out the night I dropped by, I was worried that I might miss a lot of them. After saying hello to everyone and catching them up on my travels so far we started class.

Toupin never does the same warm up, as I’ve noticed, there’s always some sort of running, and stretching, but he also throws in different dynamic movements and core exercises that could anything from sprint one side of the mat as we do laps and doing crunches and sit ups, to the shuttle burpees we did this night. The switch up makes the warm ups interesting because you never know what you’re going to be doing but you know it’s going to be at least 15 mins long. We got into hitting pads, working our jabs and crosses and different kicks as well, front snap, side, even spinning back to name a few. Once the limbs and joints were warm from striking we then worked defending them, moving to safety and countering, blocking and taking them down, etc. It was a lot of fun, although my hips were killing me, not used to kicking so much anymore.

After some randori of defending using some of techniques we trained in that night we had some time rolling. Every class I’ve been to Sensei Toupin usually ends the night with some sort of rolling, I think he does it as a courtesy to me and I always love to show them something to play around with, just as they have spent the night showing me techniques to use in the stand up game. Class goes for 90 mins, but by the time we left the mats it was closer to 2 hours because after class we were talking away about martial arts philosophy and the advantage to learning different styles and being versed in both stand and ground games. Even before the discussion started class was running late because we were having a good time, I’m sure if there wasn’t a clock in the gym we would had been training a lot later, Sensei Toupin seemed to be in a mood to train all night. It was great seeing everyone again, I love meeting clubs like Yoseikan Quebec where they have an open mind to take from other styles and share knowledge and the importance of a well rounded defense for all areas. I will happily keep going back to places like that. Thank you Sensei Toupin and the guys at Yoseikan Jiu-Jitsu Quebec for another great night! 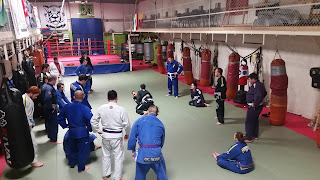 This was another club I trained at before when staying in Quebec City earlier this year. BJJ Quebec is a Brazilian Top Team affiliate and is run by Prof. Louis Bérubé, it’s also where my friend Yannick trains, in fact it’s where I met him in class one day and we’ve kept in touch ever since. The club is in with a kickboxing club and you might miss it if you didn’t know where it was hidden. Inside it pretty cool, a row of heavy bag long one wall, a long rectangular mat with the boxing ring at the far end. There’s stairs to another smaller mat space, that overlooks the main floor. I always think of Rocky III when I visit this place, I’m amazed I haven’t heard ‘Eye of the Tiger’ played in the gym yet. 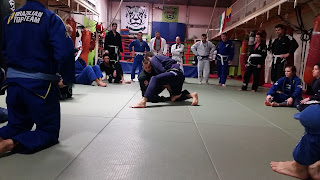 Class first looked to be a bit small, people slowly showing up, but ended up a good number out, some familiar faces and a lot of new faces too. We started with the warm doing usual things like running and shrimping and break falls etc. then got into drilling. There’s a lot of drilling at BJJ Quebec, with the timer running to to give each partner a set time to do reps in. We worked some open guard passing then moved on to butterfly sweeps, both of which I’m guessing are favourites of Prof. Louis as he’s added them to pretty much all of his classes that I’ve attended. The guard passing is usually part of the warm up, rep’ing as many at you can within the time limit to get the dynamic movement going and warm up the joints, as well as drill a practical technique. Each class I’ve been to of Prof. Louis starts with an idea, say the butterfly sweep, and gradually grows into different counters and eventually a submission, like say they post so you go X-guard, take their back, and lapel choke them, or they post and you move straight into taking the back via underhook and then as they defend the seat-belt you go fro an armbar. I’ve seen other clubs do those kinds of series as well, I like it as oppose to just training techniques from one position, like different attacks or defenses from back take, and just showing singular techniques instead of chaining to the end goal of a submission. Of course there are nights where things aren’t working for you and just drilling a single technique to get it down might be preferred. 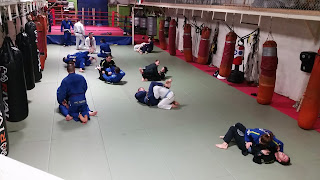 After class it was time to roll, I had a match with another stalwart blue belt, it was a even match, our styles matching each others perfectly, it was a friendly match that had us both tired. I also got to roll with my friend and host for the past few days Yannick, who had been out of training for a while, and it showed, I remember before he was at my throat out for blood, but this time around he was pretty tired and defending most the time. He knew this would happen, it happens to the best of us, life gets in the way and take time off from the mats and the mats always kicks our ass when we make it back. The important thing is getting back, and I’m glad I was a positive force to get Yannick back out. Keep it up and you’ll get your blue belt one day, maybe even before we meet again! 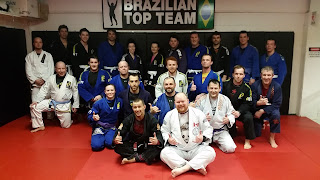 Prof. Louis is a really friendly guy who’s great to talk to talk before and after class, he usually has some good stories or insight on things. During class he’s even better to approach, if you have any questions he’ll be happy to break it down and find the problem you’re having. I say this while he teaches is French, and I am not a francophone, to be able to bridge languages and help in that capacity says a lot. Being a fan of his teaching,  and general attitude I thought it’d be great to do an interview with him, but as it happens Prof. Louis is pretty shy about talking English on camera, so I got Yannick to translate for me, making this a first for my interviews, having a translator. It worked perfectly. I got to learn how Prof. Louis got into martial arts and what he went through to get his BTT black belt and his philosophy on running his club. His story about breaking his leg is crazy, he only skims over it in this interview but we talked about it in more detail afterwards, you’ll have to ask him if you his club.

After some time in the city at the Citadelle and the last few days hanging with my friend Yannick it was time to take a series of buses to make my west to the beginning of the East Coast to Fredericton New Brunswick to see some old friends I haven’t seen since highschool and train at a gym I was told about on Reddit!

Until next time, see you on the mats!

Follow me and other traveling Jiu-Jitsueros at the NEW BJJ Globetrotters blog section.

← WELCOME TO UKRAINE!!! (previous entry)
(next entry) Figs and Earl Grey on the Open Steppe →

Hello! My Name is Rob, people call me 'Panda' I'm on a long world wide backpacking journey right now. I spent 4 months traveling across Canada (in the winter!) and now I'm hoping to spend a year across Europe and Asia. I write a weekly blog about all my experiences and sometimes have interviews with the cool people I meet. Follow along and help me out with any information you may have, hope to meet you in the future!